Abu Simbel is one of the great wonders of Egypt, second only to the Great Pyramids of Giza for its iconic architecture and heritage. The crowning jewel in Ramesses II’s illustrious collection of buildings and monuments, the temple complex has seen a thousand years of upheaval, emerging as one of the very finest monuments of the ancient world.
Discovering the world’s heritage wonders has always played a major role in our river cruises and tours, and few destinations on Earth are better suited to this kind of travel than Egypt. Join us on the great River Nile and you’ll have a front-row seat for a journey of exploration and discovery, as we encounter Egyptian monuments like Abu Simbel, Luxor Museum and the Pyramids.
Ahead of your river Nile journey, learn more about Abu Simbel and the legacy of Ramesses II in our in-depth and interactive guide below.

Given it was built over 3,000 years ago, Abu Simbel was a hugely ambitious and progressive architectural project, spearheaded by the so-called ‘God King’, Ramesses II. The site is rich in design flourishes which paint a dramatic picture of Egyptian culture, capturing the pharaoh’s approach to life, love and worship.

Discover more about the highlights of Abu Simbel below. 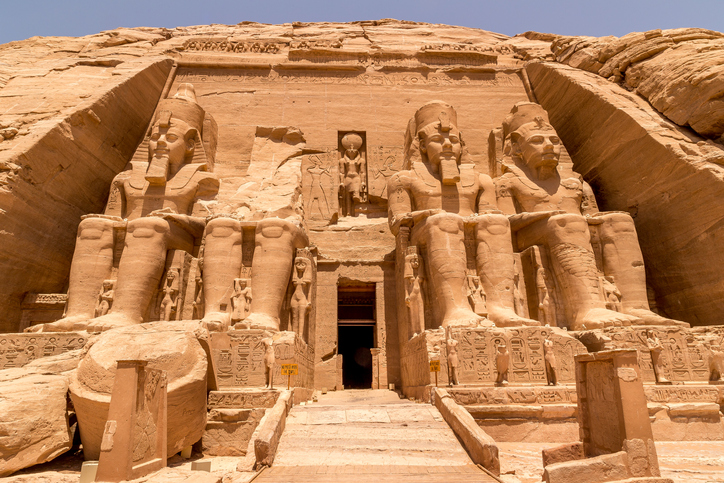 Abu Simbel’s Small Temple is found close to The Great Temple, but is significantly smaller, standing at just 12 metres in height. Historians believe that Ramesses built The Small Temple and dedicated it to Queen Nefertiti. Indeed, the Pharaoh’s adoration for Nefertiti is illustrated by the fact that the temple features two statues of the pair at the same height, which was unheard of in the ancient world. The interior of the temple is richly decorated with images of Ramesses and his queen, and also includes several depictions of Hathor, a sky deity said to represent the earthly vestiges of the sun god, Ra. Like The Great Temple, The Small Temple was moved to its current site in the 1960s, protecting it from the rising waters of the River Nile following the construction of Aswan Dam. The decision to build Abu Simbel in its original location, on the border between Egypt and Nubia, was no accident. Ramesses was well aware of the site’s sacred history, and its ancient connection to Hathor. Throughout his reign, Ramesses was revered as a god among men, and the construction of Abu Simbel on this holy site served to bolster his image. The Pharaoh was obsessed with showcasing his supposed divinity, building the temple so the sun shines directly into The Great Temple, illuminating his image in the face of Ra. And, amazingly, the two days in which the sun falls directly on The Great Temple are believed to coincide with Ramesses’ birthday and coronation, on 21 February and 21 October respectively.

Aswan Dam and the relocation of an ancient iron

In the early 1960s, the Egyptian government made public its plans to build the Aswan High Dam across the Nile, in a bid to reduce flooding and aid greater water storage and irrigation throughout the Nile Delta. In response, a team of archaeologists partnered with UNESCO to mastermind a grand plan to move Abu Simbel, which would otherwise have been left submerged in water when the Nile burst its banks.

Over a four-year period, the entire complex was painstakingly dismantled and moved to a new location 213 feet up to the top of the plateau, set down around 690 feet north-west of its original location. The work cost over $40million, and included the creation of a man-made mountain erected to make it appear that the temple had been hewn from rock. Great care also had to be taken to orientate the temples to the same position and direction.

As well as The Great Temple and The Small Temple, all of Abu Simbel’s original, statues and minor structures were also relocated, retaining the temple complex in its true original condition. To carry out the relocation safely while minimising the risk of destruction, each of the temples and buildings was sawn into blocks, which were lifted and repositioned by crane. The main bulk of the work was completed over four years, but the project wasn’t fully completed until 1980, with historians and archaeologists going to great lengths to ensure that Abu Simbel was preserved in its foremost condition.

Today, the temple complex is the most visited ancient site in Egypt after the Pyramids of Giza, with thousands of visitors making the pilgrimage to the site each year. Shortly after the relocation work was completed, a small, regional airport was constructed in the adjacent village of Abu Simbel – such is the enduring popularity of this ancient wonder.

Experience the majesty of Abu Simbel with Emerald Cruises